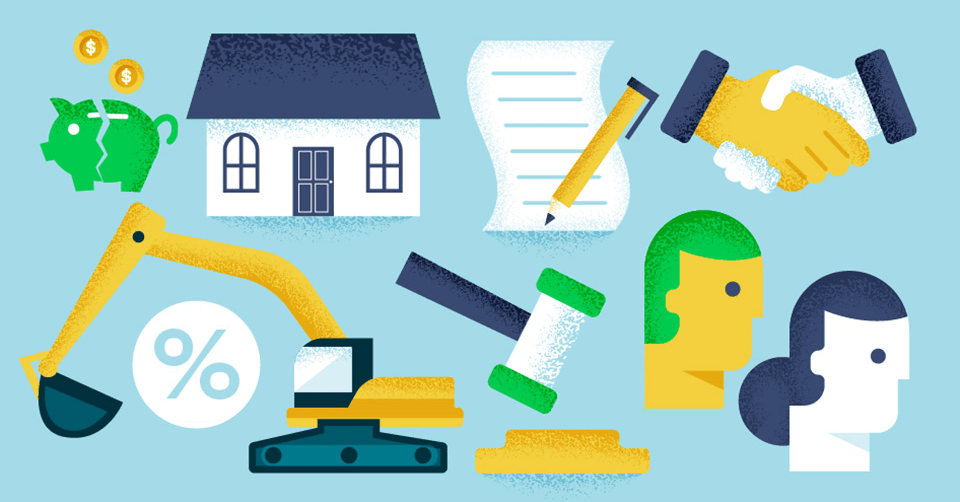 What Is a UCC Financing Statement?

The Uniform Commercial Code, or UCC, is a set of model rules that govern commercial transactions in the United States. Every state has adopted these model rules in substantially similar form, meaning that the terms of a commercial contract entered into in Connecticut is enforced in the same way as the terms of a commercial contract in Texas or any other state. The uniformity of application gives certainty to business relationships.

The filing of a UCC financial statement creates a hierarchy of which assets can be seized, and in what order, should the debtor default or declare bankruptcy. For instance, if a borrower takes out another loan from a second lender using the same assets as collateral, the second lender will not be permitted to recover the assets until the first lender is fully satisfied. Accordingly, UCC-1 filings are generally filed as soon as the loan is made. 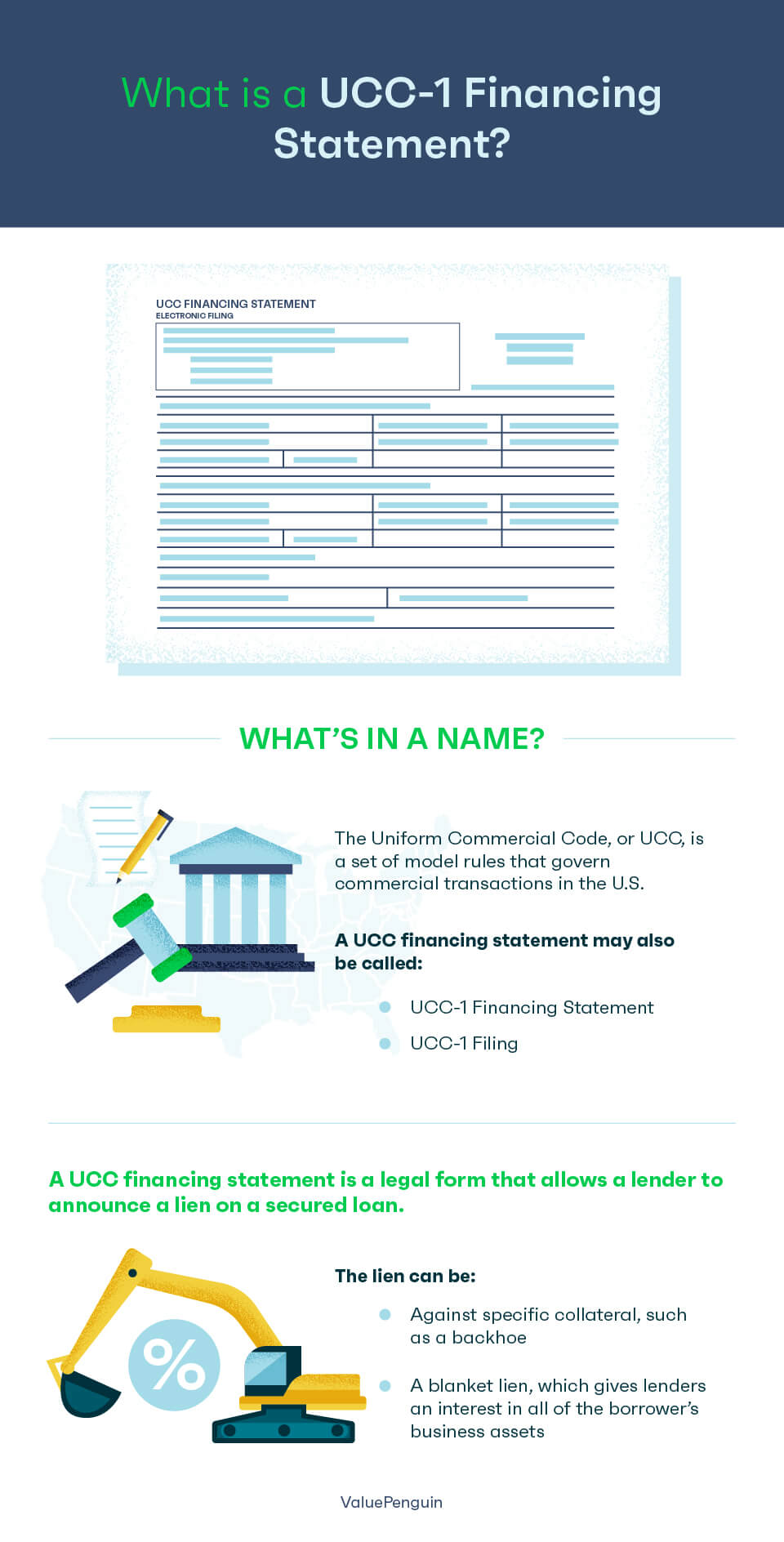 There are two types of liens that can arise under a UCC financing statement: liens against specific collateral and blanket liens.

Rather than giving an entitlement to specific assets, a blanket lien gives lenders an interest in all of the borrower’s business assets. If the borrower defaults, the lender can seize the business assets up to the value of the debt, then sell the assets to repay the debt. Assets can include tangible items like real estate and equipment, as well as intangible items like intellectual property.

This type of lien is favored by lenders. With specific collateral, if the item is destroyed or has lost value, it may not cover the loan. However, with a blanket lien, the lender can recover multiple items up to the value of the loan, giving the lender protection that a specific lien cannot.

On the flip side, a blanket lien provides minimum protection to borrowers, who could potentially lose all of their pledged assets in the event of default. In effect, this could mean that the borrower would be put out of business if the loan is defaulted. 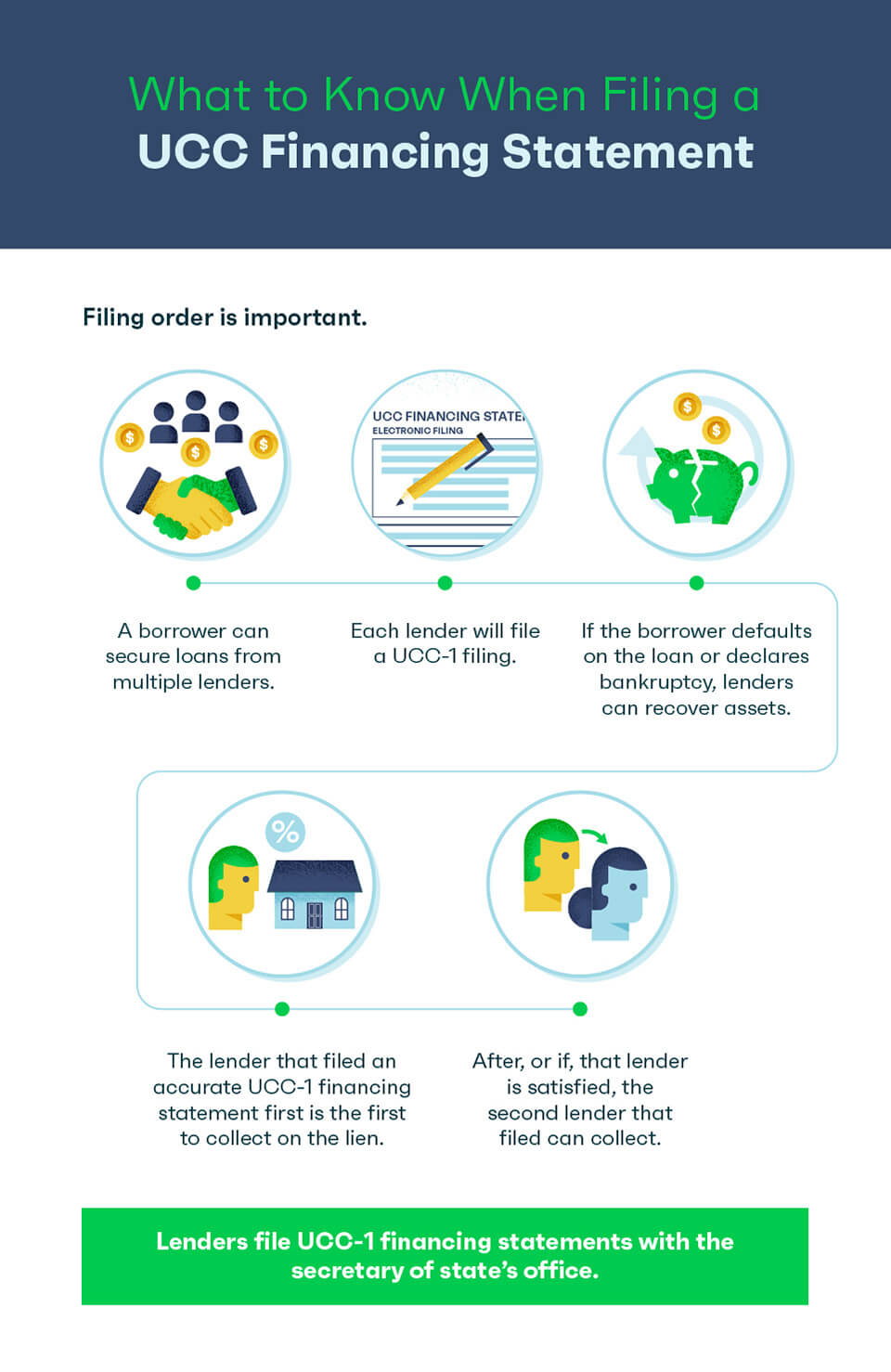 How to File a UCC Financing Statement

The order in which UCC financing statements are filed dictates the order in which lenders can collect. The first lender to file is able to repossess the collateral listed up to the value of the loan. Only after, or if, that lender is satisfied can the second lender to file collect. For that reason, lenders are apt to file quickly so they can be first in line. This also means a second lender may be hesitant to issue a loan to a borrower. Accordingly, it is of utmost importance that lenders correctly file the UCC financing statement in a timely fashion.

Information Included in a UCC-1 Filing

The following information must be included in the UCC-1 filing in order to perfect the lien:

In some states, however, such as Delaware, there is a “safe harbor” option. Under the safe harbor option, multiple names for an individual may be accepted, including a name that differs from the one listed on the driver’s license. For instance, if the debtor’s driver’s license identifies the individual as Jonathan Sullivan III, but the person owns property under the name Jon Sullivan, the name Jon Sullivan may also be accepted.

Description of the collateral covered in the UCC lien

Failure to include all of this information about the borrower, lender, and collateral could result in the state rejecting the filing. If the debtor enters into loans with multiple lenders at or near the same time, and a lender’s UCC-1 filing is rejected, this can have drastic effects on that lender’s ability to collect the loan in the event of default. The first lender to “perfect” its interest in the property, which means it has its UCC filing filed and accepted, will have priority in collecting on the loan, regardless of whether it was the first lender approached by the borrower. 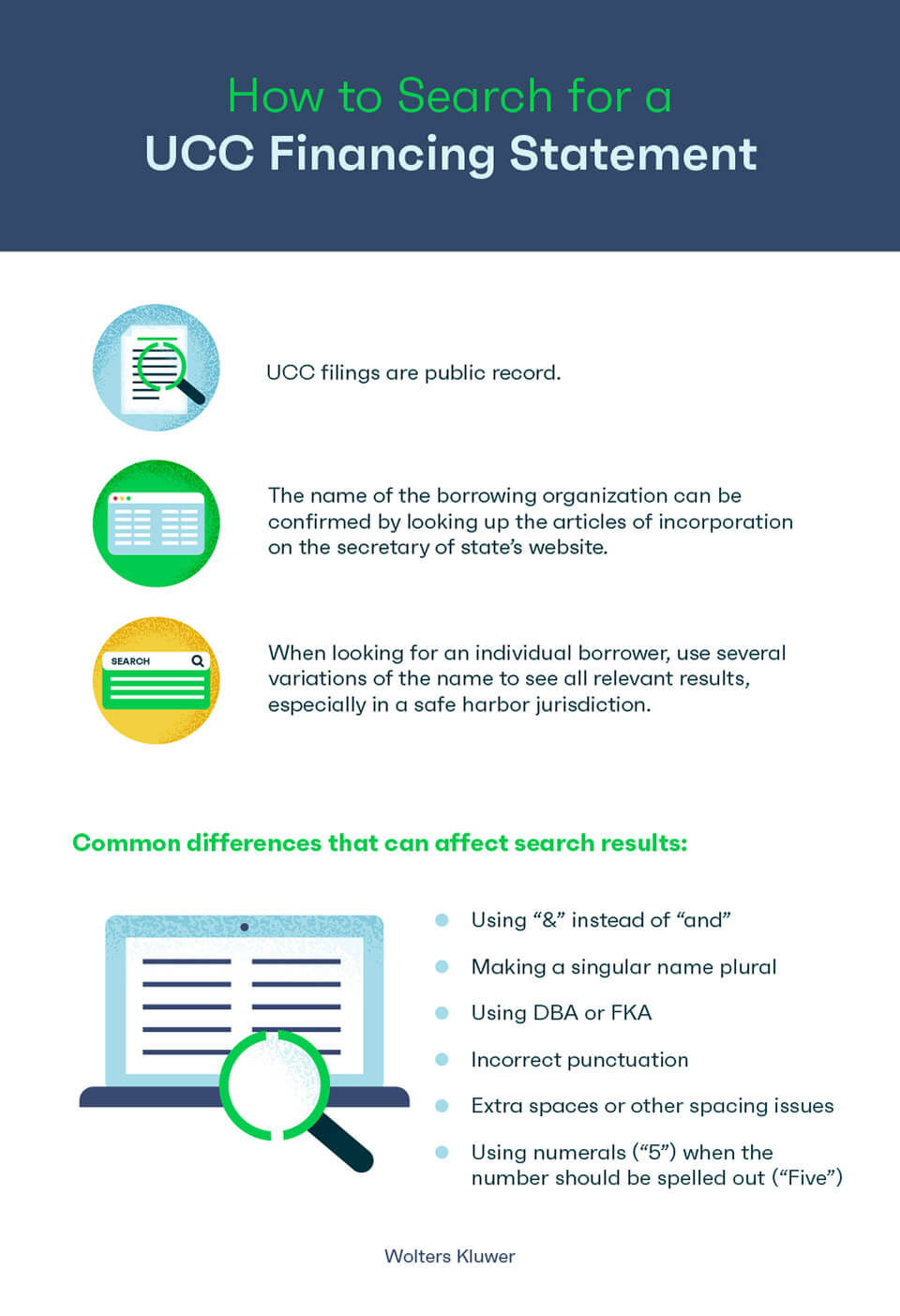 Where to File the UCC-1 Filing

In the past, UCC filings could be made where the collateral was located. However, recent changes to the UCC provide that the location of the collateral no longer determines where to file.

Instead, filings are generally made with the secretary of state’s office in the state where either:

Once the UCC filing is perfected, it becomes public record. Accordingly, people can search the relevant databases to uncover whether there is a UCC lien against any given debtor. They can also search the secretary of state’s website in the state where the debtor resides or is incorporated for the exact name of the debtor. Commercial UCC search engines have similar search functions.

It is important to stress that during a search, the name of the debtor must be exact. In the case of an organization, the name can be confirmed by looking up the organization’s articles of incorporation on the secretary of state’s website. For an individual, it is best practice to try several variations of the name to ensure that the search delivers all relevant results, especially in a safe harbor jurisdiction.