How to Amend a Contract

Parties to a contract strive to get all the essential details in writing the first time, but life happens. Parties must amend contracts when they obtain new information or discover gaps in the agreement, or if unanticipated situations arise. For instance, the rapid and unexpected spread of the Covid-19 virus around the globe in the spring of 2020 prompted many businesses to amend existing contracts, whether due to shortages in supplies or an inability to perform due to government shutdowns, travel prohibitions, or other consequences of the pandemic. This article will provide businesses and attorneys with guidance on the typical steps used to amend a contract, both before and after executing an agreement.

What Is an Amendment?

How to Amend a Contract Before Signing

Amendments to a contract before signing are not technically amendments, given that the parties have not finalized the agreement. When a party provides its standard contract to a counterparty, that contract is often relatively — or substantially — biased toward the drafting party. Therefore, to make an agreement more equitable, parties receiving the initial draft of a contract need to create a list of modifications and negotiate those requests with their counterparties.

Parties have two options for making changes before execution. First, if a party wants to make minor modifications to a contract just before signing, the party can handwrite the changes and sign their initials next to each change. The party making the amendments should inform the counterparty and make sure the counterparty also initials next to the handwritten modifications.

If a party wishes to make more significant modifications, they should first negotiate the changes and language with their counterparty. Once the parties agree upon changes, the party seeking the alterations can request that the drafter of the document modify the previous version to include the agreed-upon modifications. All parties should review the document one final time before execution to ensure that the changes are correct and that all the previously agreed upon language from the prior version is intact. Microsoft Word’s “Compare Documents” is a helpful tool that allows users to compare two versions by showing the changes to the original document. Kira System’s powerful contract analysis tools also make it easy to compare contracts. 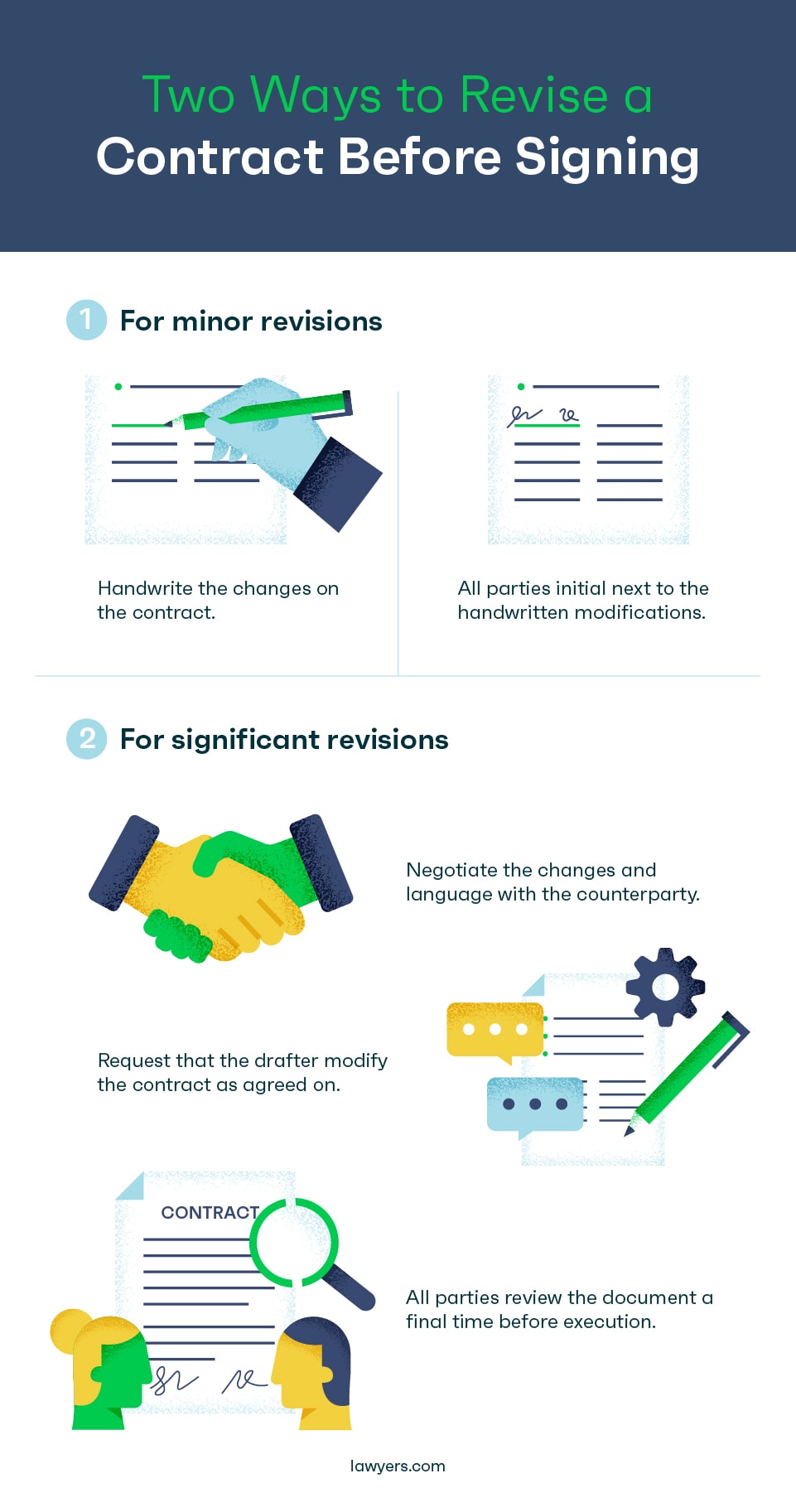 How to Create an Amendment to a Contract After Signing

Can a contract be amended once signed? The short answer is yes, provided the counterparty agrees to the amendment. Whenever a relationship between two parties begins to deviate from the outlines provided in the initial contract, or when outside forces — such as regulatory changes or component scarcities — significantly impact the contract, then it becomes time to amend the original agreement to more accurately reflect the new reality. When creating a contract amendment, the chief aim is to be as clear and specific as possible to avoid potential misunderstanding and conflict down the road.

First, look at the existing contract. Typically, a clause exists that describes how the parties may amend the contract. Usually, the clause looks something like this:

This Agreement may be amended, supplemented, or modified only by a written instrument duly executed by both Parties.

Sometimes, a contract may require additional approvals, such as from a party’s Board of Directors. Determine precisely what the contract requires before requesting the amendment. Most contracts state that future amendments must be in writing, but it’s always a good idea to put changes in writing even if the applicable contract doesn’t mandate it. By placing the contract modifications in writing, a party helps prevent future disputes about the nature or wording of the amendments.

Next, draft the necessary changes. As suggested above for changes before execution, a party may informally make changes to the contract by redlining and striking through provisions. The party amending the contract can cross out the rejected language and handwrite the new clause. Then, each party must initial and date beside each alteration to show their approval to the changes.

Another option — one which is more formal and generally preferred in the legal world — is to create a new document. In the document, clearly define which sections are to be modified, which portions are to be struck, which definitions are to be updated, and which clauses are to be added to the original contract.

When creating a separate document, the following choices exist for describing the altered language.

The first option is that the drafter of the amendment can modify certain parts of a section by striking out deleted sections and underlining added sections. For example:

11(a). Warranty claims. To make a warranty claim, the Buyer must notify the Seller in writing within 24 hours five business days of discovery of a defect.

Alternatively, if the entire clause or section must be replaced, the party can state that an entire clause has been substituted. Sample language would look like this:

Section 7 (c) of the Agreement dated 7 May 2020 is replaced in its entirety with the following:

Finally, the drafter of the amendment can describe what is being added or deleted from the original agreement. For example, if a party wants to replace a sentence from the original contract, the party can write:

If the amendments to the contract are extensive, attorneys may find it easier, and perhaps necessary, to rewrite the contract entirely to replace the older version.

For all types of amendments, add that only the referenced section(s) will be replaced and that everything else in the original contract remains as it was. For instance, the drafting party can write, “All other terms and conditions not changed by this Amendment or prior Amendments remain in full force.” Ensure that all parties sign and date the amendment. The parties can use witnesses or notarize the amendment, if needed. Provide copies to all parties once signed.

Difference Between Addendums and Amendments

Amendments are distinct from addendums, although sometimes people interchange these terms. While an amendment changes an existing contract, an addendum is a document added to an existing agreement, possibly adding terms or requirements previously left out of the initial contract.

If the terms of an addendum may potentially conflict with the terms of the original agreement, then the parties should also create an amendment regarding precedence that states which terms will prevail. For example, write:

In the event of a discrepancy between the addendum labeled “Exhibit C” and the original agreement dated 7 May 2020, the terms of Exhibit C will take precedence.

Just as humans constantly face change, so, too, do contractual agreements. Failure to recognize the consequences of relevant changes can lead to future confusion, misunderstandings, or lost value. By crafting clear, simple amendments to contracts, parties can help protect their interests, clarify the business relationship, and prevent future disputes.