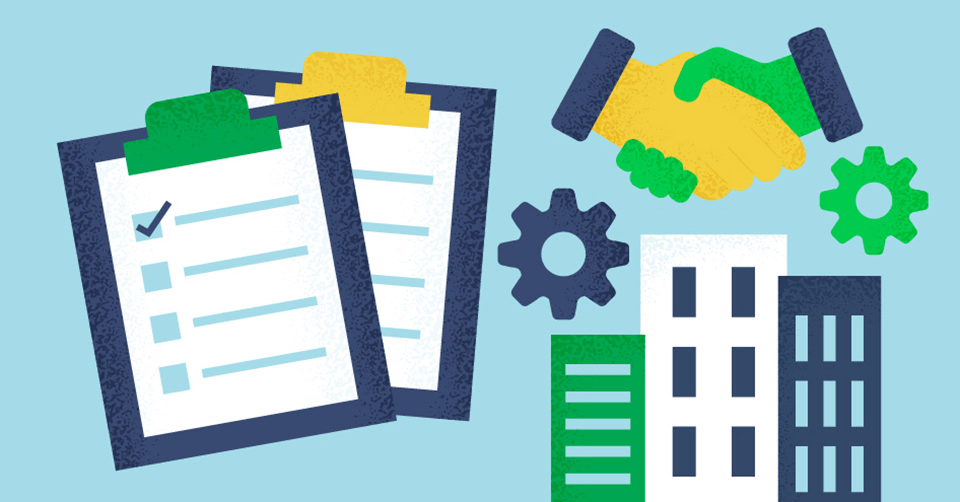 Common M&A Agreement Pitfalls (and How to Avoid Them)

Startups are in the spotlight these days, especially in the technology sector. They tend to be creative, hungry, and energetic businesses. Larger companies can recharge or renew their energy with mergers and acquisitions (M&A).

Both mergers and acquisitions refer to the combining of companies, but they involve slightly different means of combination. In an acquisition, one company buys another company outright. A merger occurs when companies join together to create a new legal entity.

These types of deals can be important for the financial and economic health of the companies involved, but they come with pitfalls. Firms considering M&A should understand the risks for both the buyer and the seller.

Dealmaking — in the form of mergers and acquisitions — has been an important part of the business finance world for many years. According to the non-profit think tank Institute for Mergers, Acquisitions and Alliances, companies have announced more than 325,000 mergers and acquisitions valued at more than $34.9 trillion over the past 40 years. Global M&A value increased by 7 percent as recently as 2018, close to the five-year average, according to BCG’s 2019 M&A report. 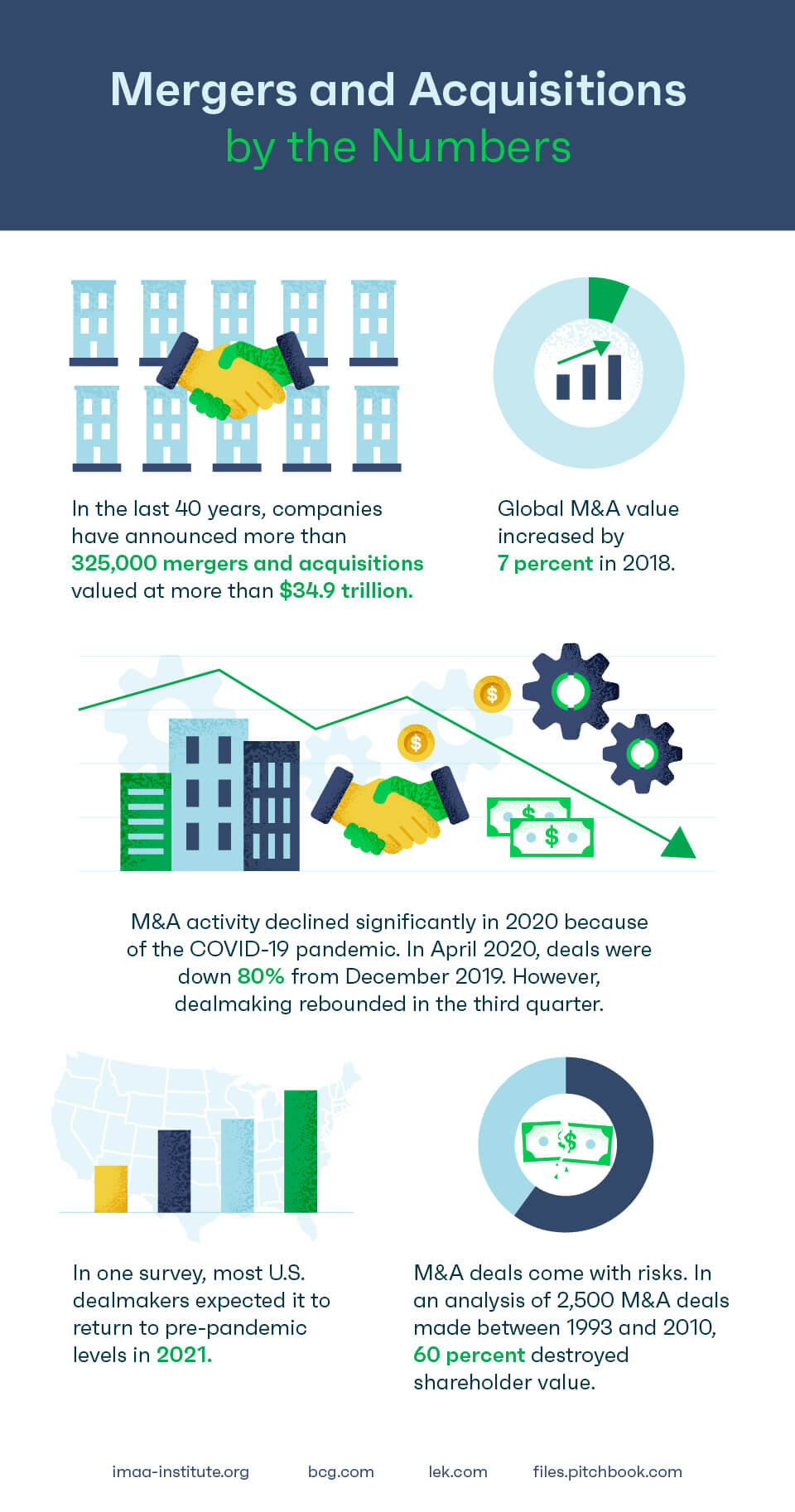 Then the pandemic roared around the globe in 2020, disrupting almost every aspect of our lives, including financial deals. It’s no surprise that, during a year of shutdowns and quarantines, M&A activity dropped significantly in 2020. But the majority of polled dealmakers in the U.S. expect M&A activity to return to pre-pandemic levels in 2021 according to Deloitte’s Future of M&A Trends Survey.

As with any complex financial arrangements, putting together a merger or completing an acquisition brings issues and risks. M&A deals can be like a marriage, in that joining together often ends in divorce. According to an analysis of 2,500 M&A deals made between 1993 and 2010 conducted by LEK Consulting, 60 percent of deals ended up destroying shareholder value. When attempting a merger or acquisition, look out for these pitfalls.

Mergers meld people, personalities, and work cultures, and failing to focus on culture is a common M&A pitfall. Both companies must encourage senior management to create a shared collaborative culture rather than an “us” versus “them” environment. Each party should learn about the other’s culture and employ a change management team to help with integration.

Joining companies too often lack transparency and excellent communication. To prevent this, management must open doors to communication. One good way is to use project management platforms built for M&A activity.

Companies need to put maximum protections into an M&A agreement in case something goes wrong. These deals are beyond the experience of general counsel. Each company should hire a top M&A lawyer, which can save money, time, and energy down the road.

Once companies join, senior management needs to have merger experience and possess skills in dealing with M&A issues. Both the buying and selling parties must take care to proceed slowly and carefully while keeping a close eye on some common mistakes.

M&A Pitfalls and Tips for Buyers

Buyers in an M&A deal need to act carefully in specific areas. Here are some of the pitfalls for buyers and tips on how to deal with them.

1. Chasing the deal without keeping an eye on the bottom line

Pursuing another company is as exciting, stimulating, and challenging as a courtship. CEOs can develop a lust for the deal that makes reality seem less important. But if a company combination doesn’t make sense from a financial, legal, or technological point of view, both companies may regret it. Moreover, overpaying for a target company destroys value for shareholders.

To avoid this pitfall: The CEO of the buyer must focus on the basics. What does the buying company hope to get through the deal? Is an M&A the best way to achieve those goals? Get a full valuation report with key business information — including tax returns, financial statements, the numbers of employees, and the organizational structure of the target company — to determine a price point and weigh the true value of the M&A.

The fact that two companies want to merge doesn’t mean that they can or will. Government regulatory agencies — such as the Federal Trade Commission — might have a say in the issue. Trying to push through an M&A against regulation will likely hit a dead end.

To avoid this pitfall: The buyer CEO should learn about the regulatory structure and compliance environment in the industry and consider hiring an experienced attorney. With knowledge and legal help, a buyer company can steer away from potential antitrust and other regulatory issues.

3. Failure to conduct due diligence

Due diligence entails tracking down enough information about the target company that the buying party can make a decision about a merger with open eyes. The process includes looking for risks in the target company’s contracts. Failure to do so will almost certainly come back to haunt the company.

To avoid this pitfall: Don’t take shortcuts. The buying company needs to know everything about the target business and must not stop at the top layer. As the buyer digs into the shadowy corners of the records, they may find circumstances that increase the costs or decrease the value of the M&A. It’s better to get all of the facts on the table before weighing the pros and cons.

4. Buying a company licensing technology instead of the rights to the technology

Too often, a company buys another and then realizes the acquired company doesn’t own its technology. If the buyer doesn’t conduct due diligence, the company may not realize until it is too late.

To avoid this pitfall: The buyer must take time to figure out exactly why they are buying the target company. Technology is a big draw these days. Is it the attraction in this M&A deal? Due diligence will inform the buyer whether the target company owns the technology the buyer hopes to integrate.

5. Failing to ensure all the right assets are compatible

A merger means two companies become one, which means they must speak the same language. An M&A likely won’t succeed if the two companies cannot integrate their technologies. This kind of deal is disastrous and can cost the buying company millions.

To avoid this pitfall: Put time and effort into due diligence. Good M&A deals result from a mix of thorough research and attention to detail to uncover information that may otherwise get overlooked. Technology is a core of businesses today and it is essential to determine its compatibility.

6. Only communicating with big shareholders

The big shareholders of a target company have the loudest voices and carry the most weight. But if smaller shareholders get left out, the acquiring company may end up paying more than expected for those shares.

To avoid this pitfall: Remember that every person is going to act in their own interests, so start talking with everyone early. People get annoyed when they feel excluded, and annoyance can make them stubborn. Include all shareholders from the start to give you time to get them on board with the merger. Negotiate tricky requests and help shareholders understand what they’re getting.

M&A Pitfalls and Tips for Sellers

A company that is being acquired needs to make a good M&A deal as well. The deal must work financially and be a good fit for the employees and products. The following seller pitfalls are as real and risky as pitfalls for the buyer.

Entrepreneurs and innovators dream of working for bigger companies with more money to support new ideas. But bigger isn’t always as good as it seems. While the buyer may have more cash, a big company’s style can clash with that of a startup. Big companies tend to move slowly as decisions work through layers of bureaucracy and committees, and the issues that seem urgent to a startup may be low on the list for the new owner. 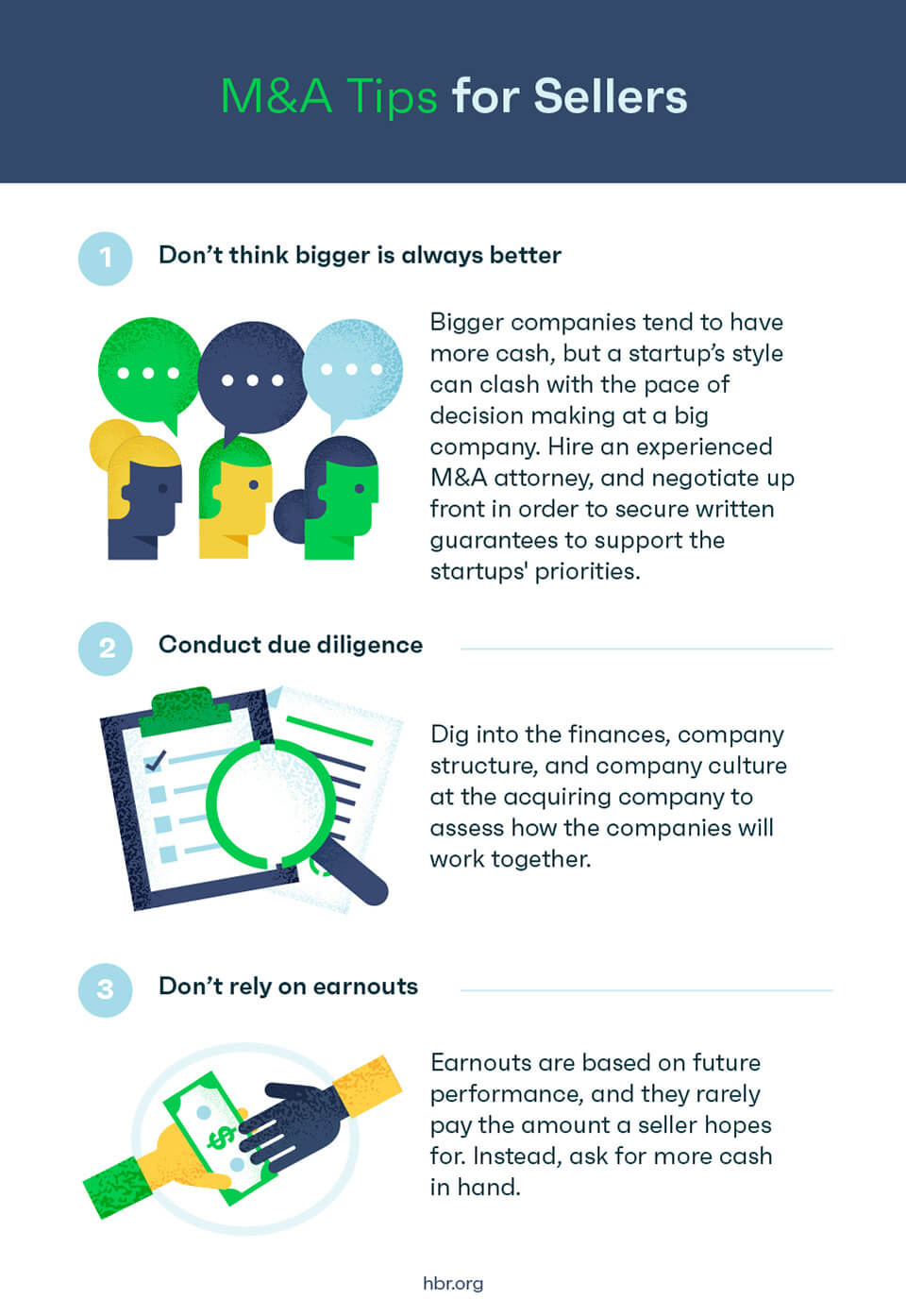 2. Failure to do due diligence

Failure to complete due diligence is one of the most dangerous pitfalls in a M&A deal, and that applies to the seller as well as the buyer. The seller should dig into the finances, company structure, contracts, and company culture of the acquiring company to figure out how well the companies will work together. Missing any aspect can lead to dissatisfaction and a bad “marriage.”

To avoid this pitfall: A seller should not be so eager to jump into a deal with the acquiring company that it closes its eyes to reality. Instead, the seller should do the required homework and make a decision with clear eyes about how an M&A will benefit and detract from the company’s goals and aspirations.

Earnouts are payments the acquiring company makes to the shareholders of the selling company at some point down the road. They are only paid well after the deal closes once the selling company hits a stated performance target. In the end, earnouts are more like daydreams than ledger entries, and they rarely pay the amount sellers hope for.

To avoid this pitfall: Be cautious about relying on earnouts. Consider asking for more cash in hand, and be sure the deal is good for the seller without earnout money.

M&A agreements come with risks. Any company considering a merger or acquisition needs to focus on the details – legal, financial and technological – to make a sound deal. It’s also essential to conduct due diligence and take culture into account. Working with experienced M&A attorneys makes the process easier.