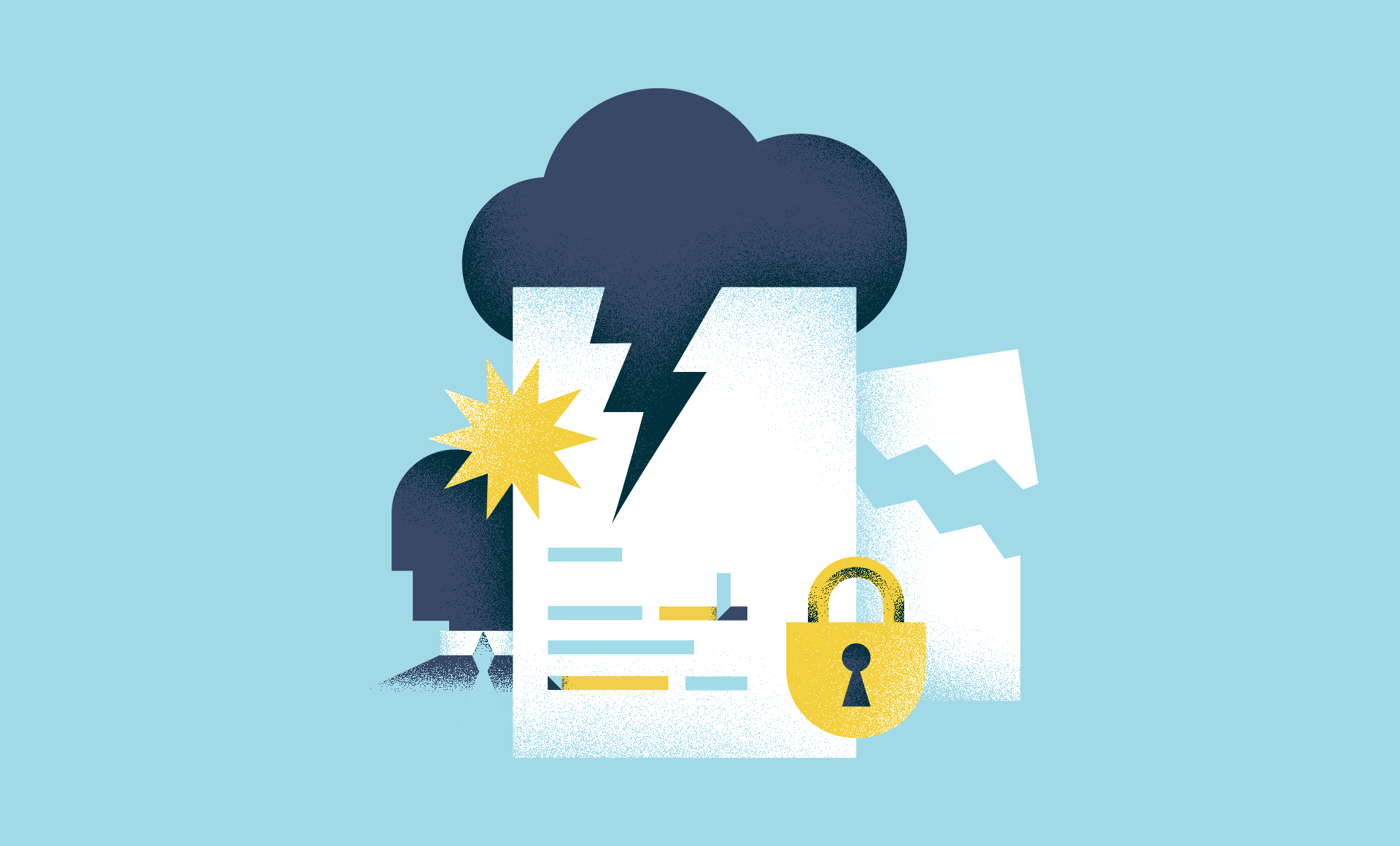 Consumers routinely ignore the small print in contracts. It makes sense that we ignore fine print since we’re inundated with it when we buy software, join websites, or sign credit card agreements. Yet when it comes to commercial contracts, good transactional attorneys understand that ignoring the small print can lead to financial losses and significant inequity in business relationships.

The small print of most commercial contracts includes boilerplate phrases, which require the same scrutiny as any other part of the agreement. What is a boilerplate clause in a contract? Boilerplate clauses are standard clauses found in most commercial contracts. Sometimes they appear in tiny print at the end of a purchase order, or they’re interspersed throughout a lengthy master agreement.

While boilerplate clauses are considered standard or general terms, parties should take care when drafting and reviewing them because they encompass a meaningful portion of every agreement. For instance, they spell out how the parties allocate risk and whether the parties protect trade secrets. Keep reading to find boilerplate clause examples, discover why you need to draft and review boilerplate language carefully, and get tips for which provisions to include. 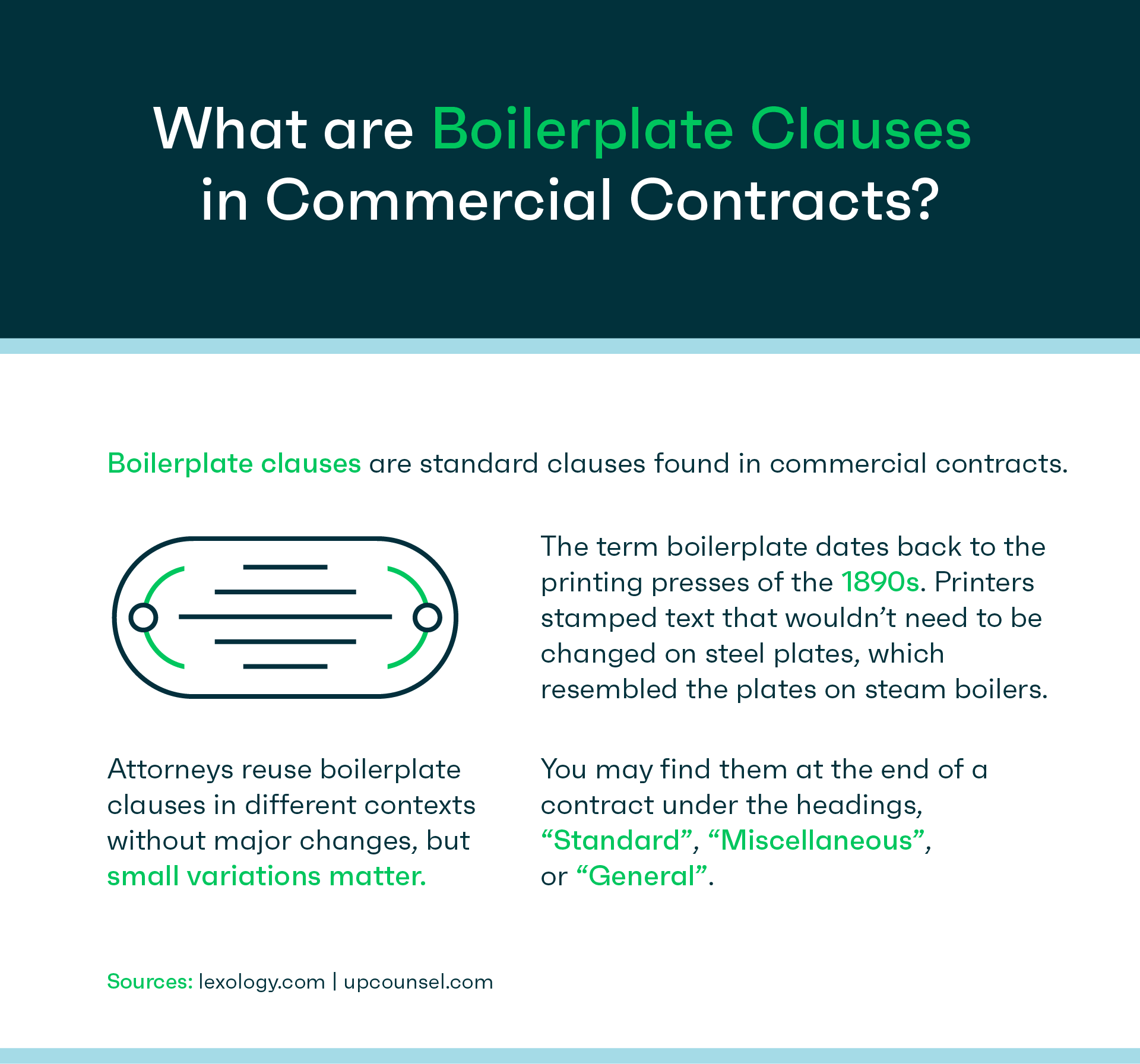 You’ll find the following clauses in many commercial contracts.

The dispute resolution clause lays out how the parties will resolve disagreements that arise during the term of their agreement. Options can include litigation, arbitration, mediation, negotiation, or some combination of these.

Each option has benefits and disadvantages. To decide which to include, think about what aspects of dispute resolution are most important for your company. Negotiation and mediation are less contentious processes, but you may be forced to compromise too much. Litigation offers the option of a jury trial and subpoena power. But arbitration gives you more flexibility with the types of admissible evidence and may lead to a quicker resolution. Or you may want to combine several options. For instance, you could require the companies’ executives to engage in good faith negotiations before proceeding to arbitration.

Indemnity provisions require one party to compensate another party for specific losses relating to the contract. You should examine indemnification clauses carefully because they transfer some of the contractual risks from one party to the other.

Often, third parties endure the losses in question. But indemnity clauses can also determine how to deal with losses endured by the contracting parties. An indemnity clause may require the indemnifying party to take over the defense of any lawsuits. Other times, it may require the indemnifying party to reimburse the other party for expenses covered by the clause.

To get a better idea of how indemnity works, imagine a baker has a contract to deliver 100 scones to a café. The contract states that the baker will indemnify the café for any claims by third parties arising from the baker’s negligence or breach of the contract. When a café patron gets sick from an undercooked scone and sues the café for damages, the café can require the baker to reimburse it for the costs it incurs in the suit or settlement.

When reviewing indemnity clauses, make sure your party is only responsible for losses caused by your own breaches or negligence. Or, if you must take responsibility for loss of your own property or injury to your workers caused by the counterparty’s negligence, make sure that the counterparty similarly takes responsibility for loss of its property or injury to its workers caused by your company’s negligence. If you’re required to reimburse the other party for expenses but not to take over the defense of lawsuits, make sure you have the right to veto any settlement offers. Keep in mind, too, that damages are not always caused by the actions of just one party. You may want to request a time limit on the indemnity obligation you could owe. For example, you could specify that your company will only indemnify the counterparty up to the amount or percentage of the damage that your actions directly caused.

Neither Party may assign any of its rights or obligations under this Agreement without the consent of the other Party, whose consent shall not be unreasonably withheld or delayed.

When you draft or review an assignment clause, keep your needs in mind. What do you want your relationship with the counterparty to look like? Do you want the counterparty to be able to assign its right to receive payment to an affiliate? If your company is considering a future sale, you need to have the right to assign the agreement to a buyer after the merger. The assignment clause should also state that any assignment by a party that breaches the agreement is void.

When an earthquake damages an entire region of a country or war breaks out where your company has operations, what happens to the affected contracts? Force majeure clauses protect parties when an act of God occurs, meaning an event which the affected party did not cause and over which they have negligible control.

When you draft or review force majeure clauses, the definition should not be too narrow or too broad. If too narrow, the clause will not capture many of the possible circumstances in which you have no control. If too broad, the counterparty could use the weakly defined clause to unreasonably excuse itself from performance.

Such clauses often (and always should) prohibit a party from claiming force majeure when the party is unable to pay balances due under the agreement regardless of the cause of the lack of funds.

Additionally, most force majeure clauses provide a time limitation for the event, after which one or either party can terminate without liability. For instance:

If a Force Majeure event lasts longer than ninety consecutive calendar days, then either Party may terminate the Agreement immediately upon written notice to the other Party.

No waiver clauses protect a party who waives—or forgives—a breach of the other party by preserving the non-breaching party’s right to enforce the contract in the future. A waiver is a knowing, intentional relinquishment of a contractual right. For example, a baker may accept a late payment by a restaurant for its scone delivery in June. But the no waiver clause allows him to enforce the payment terms in July if the restaurant fails to pay on time again.

A no waiver clause essentially says that if one party waives or forgives a breach, the waiver does not automatically waive all future breaches. It prohibits the restaurant, for instance, from arguing that because the baker permitted late payment once, all future payments can be late without consequence.

Generally, the limitation of damages clause limits only the liability owed by the party that drafted the agreement. When determining an appropriate upper limit, consider the value of the contract, the value of the relationship, the general risk of your liability under the contract, your insurance coverage, and how much financial risk you think is reasonable to bear given those factors.

Warranty clauses limit the types of warranties a company provides and prohibit claims for damages not directly caused by the manufacturer or supplier. Warranty remedies include repair, replacement, credit, or reimbursement and are limited to a specific time frame after delivery.

It’s essential to carefully draft and review warranty clauses because a company can become liable for excessive warranty repair costs. If your company provides the warranty, make sure that the decision whether to reimburse, repair, credit, or replace belongs solely to you. Disclaim damage caused by normal wear and tear or the negligence of the buyer. And retain the right to investigate warranty claims to ensure the buyer did not cause the damage. If your company is a supplier or retailer of goods, limit the warranties you provide to those given to you by the manufacturer.

While no one enters a business relationship expecting it to end early, it’s necessary to prepare in case it does. The termination clause states the reasons either party can dissolve the contract before the end of the contract’s stated term. It should also lay out the steps each party must follow upon termination and state how to allocate the costs arising from early termination.

Often, the drafting party gives itself the right to terminate for convenience without liability or provides numerous instances in which it can terminate while significantly limiting the counterparty’s ability to terminate. But for the non-drafting party, it may be preferable to ensure that the termination clauses are as mutual as possible. Require the counterparty to provide written notice of breach and stipulate a reasonable cure period to allow your company sufficient time to attempt to cure any breaches before the counterparty can terminate. 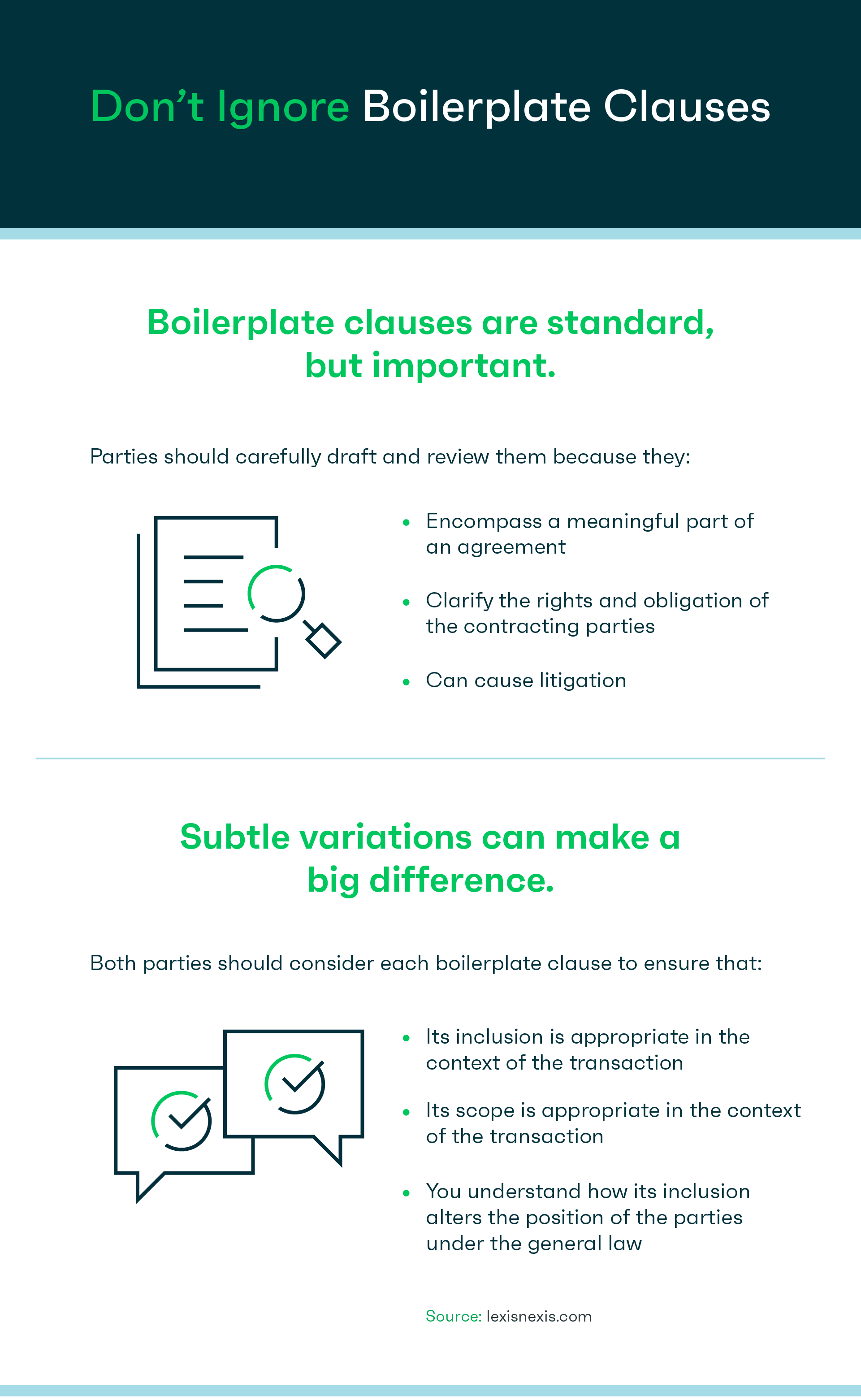 Boilerplate provisions may be standard, but they’re not one-size-fits-all. They demand your scrutiny, regardless of the number of times you’ve seen or drafted them.