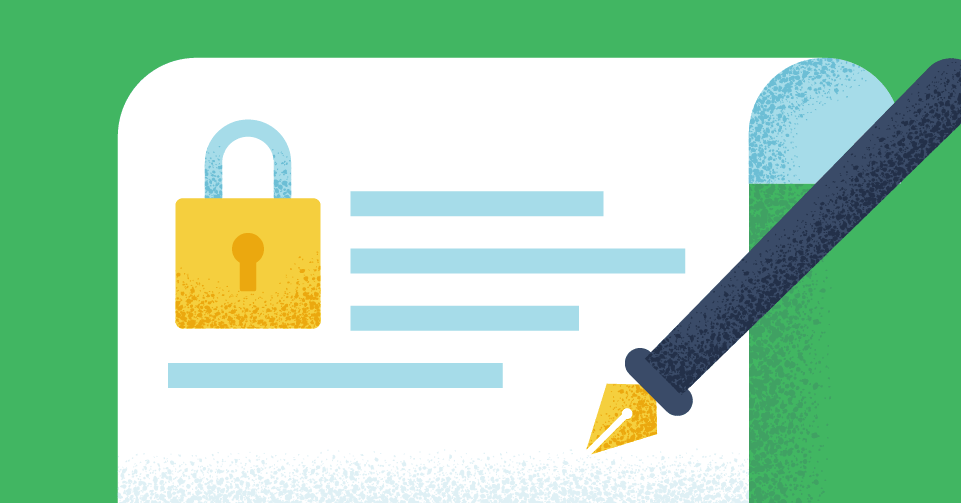 What Is a Non-Disclosure Agreement?

Non-disclosure agreements (NDAs) are confidentiality contracts that allow businesses to entrust confidential information to others. They’ve been in the news lately as a way to cover up sexual harassment issues and whistleblower claims. But they were originally conceived to keep trade secrets out of the hands of competitors, and that’s still their primary function.

Anyone considering an NDA needs to be fully informed about these agreements so they can mutually ensure the confidentiality of materials and information to be disclosed, while avoiding controversy. It’s essential to understand central points, including what NDAs are, to whom they apply, and when the courts may question them.

Why Do Companies Use Non-Disclosure Agreements?

Technology was not the first industry to use nondisclosure agreements; companies only occasionally used NDAs in maritime law before the information age. The first big tech firms deemed non-disclosure agreements critical to keep proprietary algorithms secret from competitors. From there, NDAs proliferated across the business landscape.

Companies use non-disclosure agreements to keep private information confidential. NDAs allow a company to reveal confidential business information to an employee, contractor, or another business entity with less risk that competitors or the public could learn about it. Companies often use non-disclosure agreements when they want to hire a person or business to evaluate, develop, market, or finance a trade secret.

How Do Non-Disclosure Agreements Work?

A non-disclosure agreement is a legally binding contract between the person or company who reveals information and the recipient who accesses the information. An NDA creates a confidential relationship between parties. Under the contract, the recipient agrees to treat information as confidential and commits not to disclose it to others without proper authorization.

What Does Non-Disclosure Mean?

And failure to take care may also breach an NDA. For example, if a tech designer carelessly leaves a prototype of a new product where a third party can discover it, the failure to use reasonable care may breach a carefully drafted NDA.

Who Is Bound By an NDA?

An NDA should spell out in the contract terms which parties it binds. Some NDAs are unilateral and only bind one party from disclosing confidential information. Others are bilateral and bind both parties.

When writing a non-disclosure agreement, consider all the people and entities who may work for or on behalf of the named parties and may access the confidential information. Some NDAs limit access to specific groups of people, such as attorneys or consultants, to minimize the risk of third parties getting it.

What Information is Protected by an NDA?

While it’s essential to identify who is bound by the terms of a non-disclosure agreement, it’s equally important to clearly specify what information is protected. The NDA should contain a definition of confidential information that spells out the categories of information covered.

It’s easy to think that the more general the definition of the confidential information, the broader the protection. But a broad approach creates issues with enforceability. The more specific an NDA is about the scope of the covered information, the easier it is to enforce the terms.

What About Marking Confidential Information?

As an alternative to marking, the company can include a general provision shifting the burden to the recipient. For example, the NDA may define confidential information as “all information that would be considered confidential by a reasonable person given the nature of the information or the circumstances of disclosure.”

If the NDA includes designation procedures, the company should ensure all employees and contractors follow them consistently. For example, if the NDA requires all protected information to be marked confidential, every employee must comply.

Many businesses wonder how to send non-disclosure emails under this rule. Anyone sending an email referencing a protected matter should label the email and any attachments “confidential.” They should also include a notice designating the email as confidential. A concise version may look like this: “This email and all of its attachments are confidential and intended solely for the use or review by the person or entity to whom it is addressed. If you have received this email in error, please advise use by return email and delete the email and files from your system”

What Information Is Not Protected by an NDA?

Sometimes information considered confidential under an NDA may be disclosed by third parties or become public through no fault of the recipient. Generally, NDAs anticipate this circumstance by carving out exceptions for:

How Long is the Confidentiality Obligation?

Many non-disclosure agreements do not set a limit on the duration of the confidentiality obligation. However, indefinite agreements may not be necessary or appropriate.

The life of the confidentiality obligation should relate to the useful life of the information in question. For example, an NDA that prevents a tech designer from revealing details about a new product may terminate when the product is put on the market.

An indefinite duration can sometimes impose a heavy burden on recipients if they must store the disclosing party’s data. The courts could find an unlimited non-disclosure agreement unfair. The enforceability of the term of confidentiality will depend on the industry involved and the type of information being disclosed.

Can an NDA Be Broken?

A non-disclosure agreement doesn’t guarantee that the recipient of confidential information won’t reveal it. Contract terms only bind the parties legally and may spell out legal consequences for violation.

When a party breaks a contract term, it’s called a breach. Parties can breach NDAs as easily as any other contract. When one party breaches an NDA, the other party can look to the legal remedies available.

What Are the Remedies for Breach of a Non-Disclosure Agreement?

When someone breaks a contract, the aggrieved party generally has the option to pursue two remedies

In rare cases, if the breach is intentional and particularly egregious, the court may award punitive damages to punish the disclosing party.

Both state and federal laws restrict the use and scope of non-disclosure agreements in the area of whistleblower, sexual harassment, and other discrimination complaints. For example, laws in many states including California, New York, Illinois, Nevada, New Jersey, Oregon, and Vermont limit an employer’s ability to use non-disclosure provisions to conceal sexual harassment and other claims against the employer.

At least 20 states have enacted “sunshine-in-litigation” statutes that prevent courts from enforcing NDAs in cases where the issue is a public hazard. For example, the tobacco industry would not be able to use NDAs to conceal information about the dangers of smoking. Other laws prohibit courts from approving (and thereby sealing) “confidential” settlements.

Federal law and general public policy also restrict the scope of NDAs in a variety of circumstances. For example, Rule 21F-17, issued by the Securities and Exchange Commission, forbids NDAs that limit whistleblower communications with the SEC.

The drafter must also look out for public policy issues. The court is likely to throw out as void against public policy any NDA provision that prevents an employee from disclosing illegal or criminal behavior to an appropriate government agency.

What About NDAs and Sexual Harassment?

Although non-disclosure agreements can provide necessary protection for businesses to protect their trade secrets, NDAs have recently gotten bad publicity for serving as vehicles to prohibit victims of sexual harassment or assault from sharing their stories. Companies often include NDAs in a “confidential” litigation settlement that prohibits disclosure to anyone ever.

In one of the most discussed cases, the attorneys working for powerful movie mogul Harvey Weinstein used elaborate non-disclosure agreements to keep Weinstein’s accusers quiet. The terms of the NDAs forbade the women from speaking to anyone, from family to the press, about the alleged sexual assault and harassment.

Most victims are reluctant to share their stories even without an NDA. They are even more likely to keep quiet out of fear of the hefty financial penalties set out in an NDA. That’s why many states prohibit the use of NDAs in confidential sexual harassment or assault settlements.

Many businesses routinely employ nondisclosure agreements today to prevent their trade secrets from being made public and to keep confidential matters secret. Anyone considering using an NDA should consider the basic issues — such as what data needs to be protected and for how long — before signing the contract.